Forget dementia, remember the person! Breaking down stigma to move forward towards an inclusive society in Flanders (Belgium)

When we focus on the capacities of people with dementia instead of their limitations, their dementia disappears behind their talents. That is the starting point of the Flemish awareness raising campaign ‘Vergeet dementie, onthou mens’ (‘Forget dementia, remember the person’). The story of this campaign forms one of the foundations of the Dementia Strategy of Flanders (Belgium) and is written together with people with dementia and their caregivers. Their vision makes the beating heart of ‘Forget dementia remember the person’. Respectful communication is the basis for person-centered care and an inclusive society.

The best medicine for someone with an incurable condition does not come from a pillbox. It is found at our fingertips. It is our attention, empathy, listening ears and time. People with dementia and their loved ones want to be valued, understood and included. That is exactly what we want to do in Flanders with ‘Forget dementia, remember the person’. We do not start from a well-intended kind of pity for people with dementia, but from sincere compassion and a firm belief in their everlasting capacities, not only right after their diagnosis but throughout the condition.

As the Flanders Centre of Expertise on Dementia and official partner organization of the Flemish Authority in Belgium, we coordinated the campaign together with our partners in the field last year, but the work is far from finished. Every day, we continue to spread our message: give more power to the people. Personal experiences are the heart and soul of this movement. Through this grassroots strategy, we want to break down the walls between (in)formal care and the rest of society, bridge gaps between generations, urge for respectful communication, smash stereotypes and sustain existing dementia-friendly efforts.

The power of visual communication

On the dynamic web platform and social media of the campaign, people can find a wide range of dementia-friendly communication tools as a starting point to break down the stigma on dementia and to give a voice to the person behind the condition. The mission statement of our campaign was translated in a short animation movie, written together with people with dementia and their caregivers. Moreover, there is a series of cartoons that stress the importance of respectful language when we talk about dementia and invites everybody to stay close to people with dementia instead of avoiding them. Dementia is already difficult enough to cope with, so why don’t we start to find more joy in things that people with dementia still love to do?

Together with a professional photographer and people with young-onset dementia from a day care center in the city of Antwerp in Belgium, we made posters that explain the feelings of people with dementia and invite you to enter their world. Additionally we designed four short graphic novel-stories about communication in the last stages of dementia, with a clear message that was written down on one of the visuals by a person with dementia:

“Learn to read the language of people with dementia. Try. Listen. Search. Feel. Find. Look. Listen to me, also when words disappear.”

To distribute the campaign message, people can also order free photographs from a rich picture database that depicts the baseline ‘Forget dementia, remember the person’ visually.

Example of photographs used in the “Forget dementia, remember the person” campaign

Personal stories are the key to change

The beating heart of the campaign are the personal stories of the experts, namely people with dementia, their caregivers and people who experience dementia every day. More than 50 audiovisual testimonies were released in Dutch during the first half of 2019. They all have one thing in common: the massive impact of stigma on the challenges in the daily care and support for people with dementia, such as receiving a timely diagnosis, care acceptance, advanced care planning and sustaining social networks. Reducing the stigma of dementia is the foundation of the dementia strategy in Flanders. Both the stories of people with dementia and scientific research and daily care practice highlight the vital importance of breaking down stigma. The video statements are centralized around three basic questions, which form the core of our stigma-breaking initiatives of the campaign ‘Forget dementia, remember the person’:

During the second half of 2019, some personal stories were also be made available for the international audience with English translation through the YouTube-channel of the Flanders Centre of Expertise on Dementia. This way, we can contribute to the international movement towards advocacy and involvement of people with dementia. We use the different communication tools described and a pioneering initiative in the field: the start of the first-ever ‘Working group of people with dementia’ in Flanders to achieve our aim.

The first-ever ‘Working group of people with dementia’ in Flanders

Valuing the experts by experience

The start of this working group is not a symbolic initiative, but a crucial step towards empowerment and validation of people with dementia and their caregivers. We include their voice more proactively in the media, and integrate them fully into new projects, research and policy work. The Flanders Centre of Expertise on Dementia started brainstorming about the idea at the beginning of 2018, together with the other plans for the new chapter of ‘Forget dementia, remember the person’. The centre joined forces with the Alzheimer’s Association of Flanders to carry the ambitions for this new working group into practice.

At the moment, we have six people with dementia involved, together with their family caregivers. It is our ambition to involve people with dementia at all stages of the condition, not only in the early stages of dementia and not only people who are younger than 65 years. Since the group held its first meeting in October 2018, we have focused on creating an open, strong partnership between the members as a foundation to move forward with tangible actions in 2019. After five intensive meetings, we shot an introduction movie with the members of the working group. This served as our call to action for a dementia-friendly society. In May of 2019, we released the movie for the media and public in Flanders and on World Alzheimer’s Day 2019, the English version of the movie was released for the international audience.

Together, we released the first ‘Charter for a Dementia Friendly Society’ written by people with dementia, another unseen initiative in our country. We want to empower people with dementia and reach out to society to respond to their needs and respect their rights. The goals were defined clearly by the working group:

These ambitions are not optional. They form the foundations for an eventual new dementia strategy in Flanders. We hope that this strategy will begin in the near future, depending on the current health situation around COVID-19 and the policy priorities the coming months.

These initial steps are only the start of an intensive and inspiring journey that will lead to and an integrated vision for the coming years. We hope that the message of the ‘Flemish working group of people with dementia’ in Belgium gives people in other countries an extra dose of inspiration and motivation to continue building an inclusive society that gives people with dementia and their loved ones the place they deserve: not in the margin, but at the center of a kind and understanding society. And from the bottom of my heart, I sincerely hope that our initial campaign ‘Forget dementia, remember the person’ may inspire people across the globe. In the end, people with dementia should always be the reference point and quality check of a dementia-friendly society. That is true inclusion and empowerment. That is the only way forward.

Flanders Centre of Expertise on Dementia

This article is a revised text of the publication in the most recent World Alzheimer Report ‘Attitudes to Dementia’ of Alzheimer’s Disease International: https://www.alz.co.uk/research/world-report-2019.

For more information about the campaign and the ‘Flemish working group of people with dementia’, feel free to get in touch with Olivier Constant:

Olivier Constant holds a Master Degree in ‘Social Sciences’ with a specialization in ‘Medical Sociology’ and a Master Degree in ‘Film Studies & Visual Culture’. For more than eight years now, he’s responsible for the communication policy of the Flanders Centre of Expertise on Dementia. Based in Antwerp, the Expertise Centre operates as an official partner organization of the Flemish Government (Belgium) that works to spread research, good practices and clear communication tools about care for people with any type of dementia. As a communication officer his key missions are:

– Coordination of internal and external communication – Editorial and content management – Implementation and coordination of the campaign ‘Forget dementia, remember the person’, that strives for empowerment of people with dementia and wants to spread a more realistic image of dementia

– Coordination of the international project ‘Dementia in Cultural Mediation’ (DCUM), a European collaboration between partners from Belgium, The Netherlands, Spain and Denmark that explores the value of arts and culture to enhance quality of life for people with dementia and their caregivers

Olivier Constant has been active as a speaker in different conferences and meetings on dementia in countries as Belgium, the UK, Denmark, Germany, Canada, Slovenia, Malta, Hungary, Luxembourg, Austria, The Netherlands, the USA and Japan. He is also a member and Belgian representative of WYLD (World Young Leaders in Dementia), an international network of passionate, young professionals working across disciplines and borders to develop innovative dementia solutions. Since 2012 he is active as a coordinating member of the ‘Interregional Working Group on Dementia Friendly Communities’ between Flanders & The Netherlands. Recently he started the first ever ‘Working group for people with dementia’ in Flanders to build further on a true inclusive society for people with dementia and their caregivers. 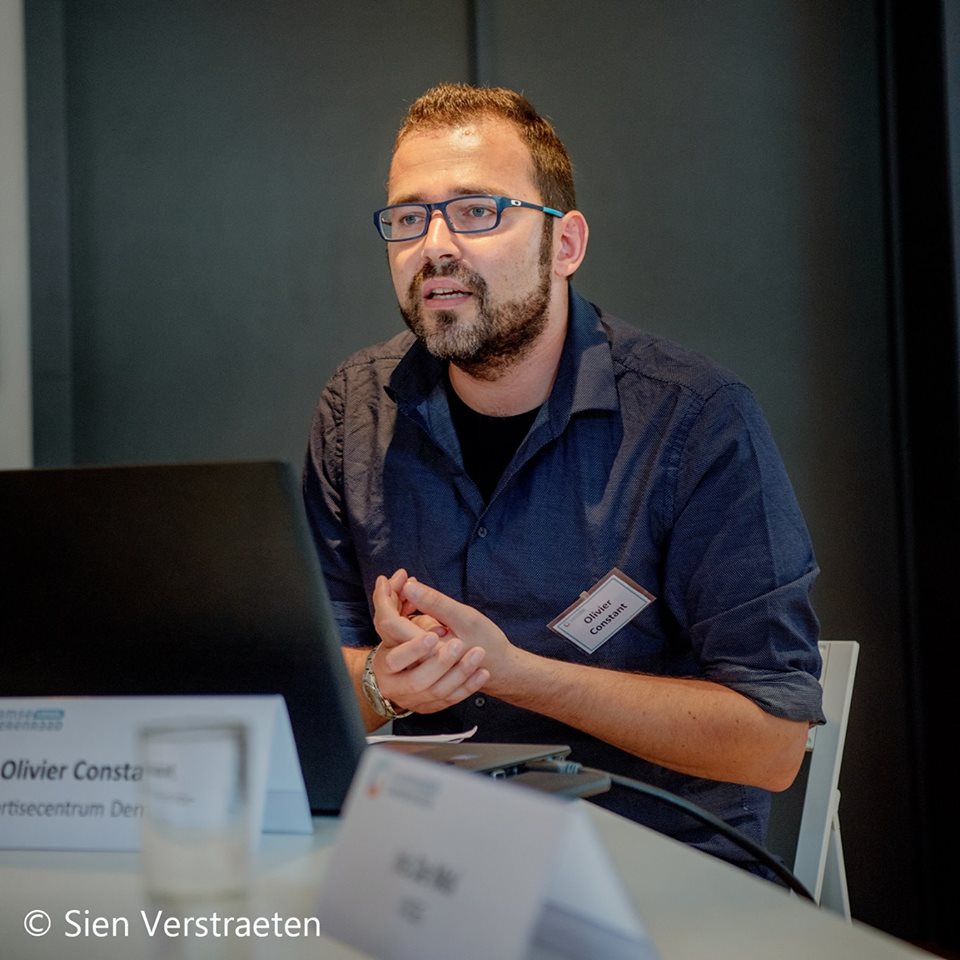